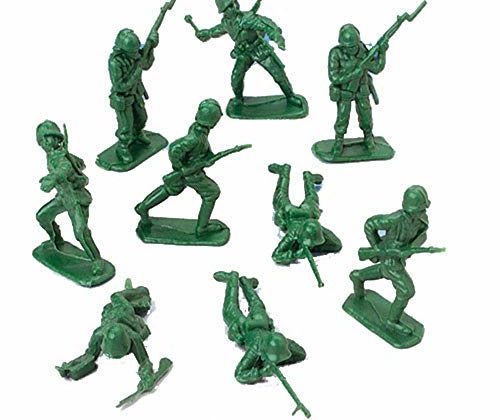 Many of us were culturally indoctrinated into the Military-Industrial-Complex ideology, not by reading some political manifesto but by playing with rudimentary military action figures. By the 1960s, Marx sold enemy soldier figures little boys could use when performing their play war games. How many of you combined those little green soldiers with a bevy of Black Cats for a more authentic feel of war battles?

Donald Levin told Stan Weston his 12-inch military action figure would make him lots of money. He inked a deal with Hasbro in 1963 for $100,000. Adjust for inflation, Weston made over $826,000 with his crude plastic soldier that would later become G.I. Joe.

While some of us were neck-deep in dirt mounds playing with our little military action figures in 1968, the adult world could not believe the set-back the U.S. Military faced in October of that year. I would later learn in college during an intensive on Vietnam with Dr. Dale Soden that event was called the Tet Offensive. It was a bloody year. Not only did we face some of our worst losses, stateside witnessed the murder of Martin Luther King Jr, Robert Kennedy, and Thomas Merton. There is debate as to whether 1968 was the bloodiest year in our history.

Dr. Soden took us through the PBS series, Vietnam: A Television History. That was 1984. We read A Rumor of War by Philip Caputo and Dave Halberstam’s The Best and the Brightest, among others. In 2011 we would finally have access to documents, papers that revealed what had been rumored about the conflict in Vietnam. The Pentagon Papers came to mind this week when The Washington Post produced a series of articles based on documents released under the Freedom of Information Act dubbed, The Afghanistan Papers.

My friend Marty published a blog post after reading one of the WaPo articles. His reference to the Pentagon papers reminded me of the line I first read referenced by Slavoj Zizek, “History repeats itself. First as tragedy, then as farce.” I later learned he picked the line up from Karl Marx while reading Merold Westphal’s, Suspicion and Faith. The sad reality is that we have long been living the farce.

In her book, Advent: The Once and Future Coming of Jesus Christ, Fleming Rutledge offers a sermon from 1994. She references a Vanity Fair piece titled, God and Man in Rwanda. She quotes the article,

“The story goes that a French priest in Rwanda who had survived the massacres of the spring of 1994 was asked whether his experiences had shaken his faith in God. ‘Absolutely not,’ he replied. ‘But,’ he added matter-of-factly, ‘what happened in this country has destroyed my faith in mankind forever’ … In Rwanda thee days, even an atheist has a hard time pushing away the thought that God is a better bet than man.”

Maybe it is those who have not suffered at the hands of others who feel greater confidence in human ability to solve the world’s problems. A copy of Scott A. Shay’s book, In Good Faith: Questioning Religion and Atheism, arrived this week. Shay relayed a comment he received from a friend while they were ordering sushi,

“As for you, well, as a believer you have it all wrong. Why should anyone in his or her right mind believe in God? We should be enthroning man instead.”

Some seem unfazed by the realties that spurred a Hotel Rwanda. Enthroning man is what Shay contends is idolatry. It is more than the stuff of Asherah Poles and Golden Calves. It is more Rick Perry enthroning a President under the rubric of Divine authority.

“We find it hard to acknowledge that the past century was one of vast killing field[s], because we thought it would be a time when all forms of dogmatic fanaticism, which were assumed to be the breeding grounds of violence, would be left behind. We thought the twentieth century would be the time when the human spirit would be unleashed to create a more humane world by being freed from the arbitrary traditions that we thought to be the source of our violence. That world, that more humane world, turned out to be a world of unending war.”

Dismissing the Scriptures is to miss the Disarmament Papers. It is not that we don’t acknowledge some challenging passages in the Scripture related to human conflict, genocide, abuse of power, and on and on. No, we admit it. It is part of the human story. Every time finite humans are enthroned as infinite hope, it turns out to be a continuation of the farce that we will progress until we get it right.

Advent is the setting. It is the description of human time whether that period before the coming of Jesus in Bethlehem or our Blessed Hope that he will come to make the not-yet the already. That these days, many Christians want to re-arm Jesus is a not so subtle betrayal of the King who disarmed the powers unarmed. The pages of Holy Writ point to a subversive story that unfolds amidst the very typical farce of human progress.

The world is still awash in warring ideologies. G.I.Joe is passé. Today it is Call of Duty and countless other forms where the solution used when facing our enemies is the same. Kill them. The Disarmament Papers, the Scriptures, tell a different story. Jesus disarmed the Powers of Sin and Death in his death.

And having disarmed the powers and authorities, he made a public spectacle of them, triumphing over them by the cross. (Col. 2:15)

Advent today holds a better story than the one symbolized in little green soldiers or offered in virtual reality technology. The Promise of the Gospel is the disclosure of schemes to keep people unaware. The Gospel is the declaration of God’s victory over our enemies in a form that makes no sense to those steeped in the Military-Industrial Complex but is no less true.